Pa11y Dashboard is a web interface to the Pa11y accessibility reporter; allowing you to focus on fixing issues rather than hunting them down. 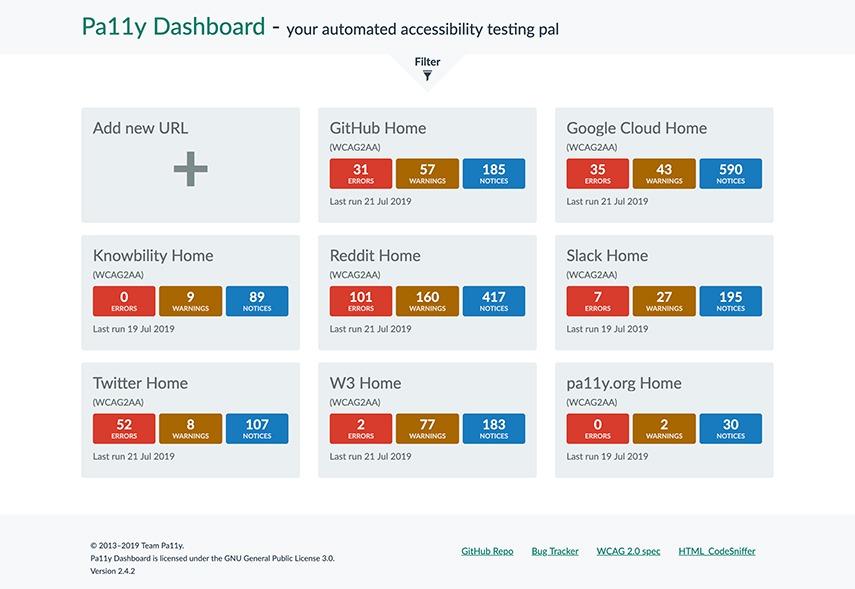 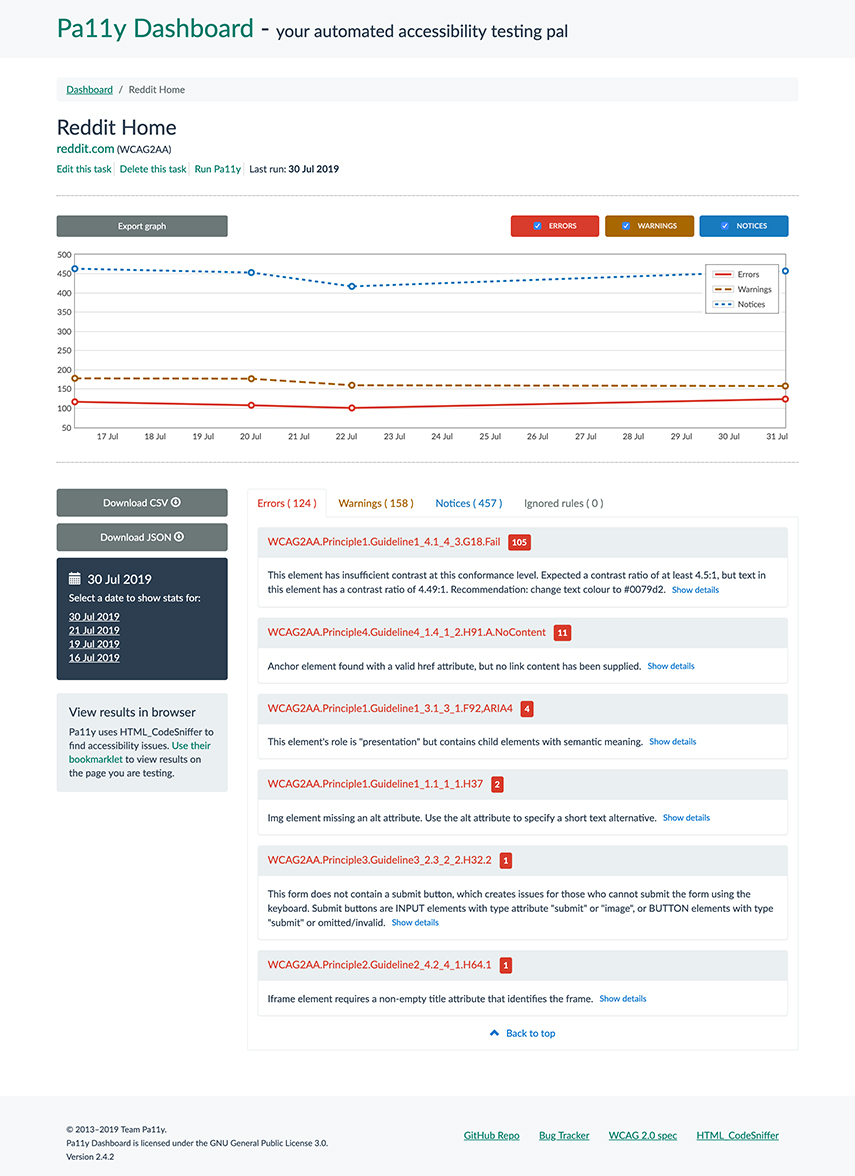 Pa11y Dashboard is a Node.js application and requires a stable or LTS version of Node, currently version 12 or 14.

Pa11y Dashboard uses a MongoDB database to store the results of the tests. The database doesn't have to be in the same server or computer where Pa11y Dashboard is running from.

Pa11y Dashboard uses puppeteer to create a headless instance of the Chromium browser in order to run the tests. On certain environments this may require additional dependencies to be installed. For example, in Debian/Ubuntu systems you may need to install the libnss3 and libgconf-2-4 libraries in order to be able to run tests on Pa11y Dashboard. Please refer to the documentation from your provider for details on how to do this.

In order to run Pa11y Dashboard, we recommend cloning this repository locally:

Then installing the dependencies:

Instructions for installing and running MongoDB are outside the scope of this document. When in doubt, please refer to the MongoDB installation instructions for details of how to install and run MongoDB on your specific operating system. An example of the installation and configuration process for macOS follows.

Pa11y Dashboard currently uses version 3 of the Node.js MongoDB driver, which means that only MongoDB servers of versions 4.4 or older are supported. Please ensure that your MongoDB server fills the requirements before trying to run Pa11y Dashboard.

Check that the service has started properly:

The last step before being able to run Pa11y Dashboard is to define a configuration for it. This can be done in two ways:

Each configuration can be set with an environment variable rather than a config file. For example to run the application on port 8080 you can use the following:

The available configurations are documented in the next section.

Three example files are provided in this repository, you can copy and customise them to your liking:

The available configurations are documented in the next section.

The boot configurations for Pa11y Dashboard are as follows. Look at the sample JSON files in the repo for example usage.

(number) The port to run the application on. Set via a config file or the PORT environment variable.

(boolean) If set to true (default), the dashboard will not be indexed by search engines. Set to false to allow indexing. Set via a config file or the NOINDEX environment variable.

(boolean) If set to true, users will not be able to add, delete or run URLs (defaults to false). Set via a config file or the READONLY environment variable.

(string) A message to display prominently on the site home page. Defaults to null.

This can either be an object containing Pa11y Webservice configurations, or a string which is the base URL of a [Pa11y Webservice][pa11y-webservice] instance you are running separately. If using environment variables, prefix the webservice vars with WEBSERVICE_.

There are many ways to contribute to Pa11y Dashboard, we cover these in the contributing guide for this repo.

If you're ready to contribute some code, you'll need to clone the repo and get set up as outlined in the setup guide. You'll then need to start the application in test mode with:

You'll now be able to run the following commands:

To compile the client-side JavaScript and CSS, you'll need the following commands. Compiled code is committed to the repository.

Check the issue tracker for similar issues before creating a new one. If the problem that you're experiencing is not covered by one of the existing issues, you can create a new issue. Please include your node.js and MongoDB version numbers, and your operating system, as well as any information that may be useful in debugging the issue.

We also maintain a migration guide to help you migrate.

If you're opening issues related to these, please mention the version that the issue relates to.

Pa11y Dashboard is licensed under the GNU General Public License 3.0.

Made by ILUNION for the Prosperity4All project: Ecosystem infrastructure for smart and personalised inclusion and PROSPERITY for ALL stakeholders. This project has received funding from the European Union’s Seventh Programme for research, technological development and demonstration under grant agreement, No 610510.

If you see an error or omission or if you have any other comments, please let us know